* For reference, The Matchington Mansion game Reviews websites are all approved, there are no viruses and malware. 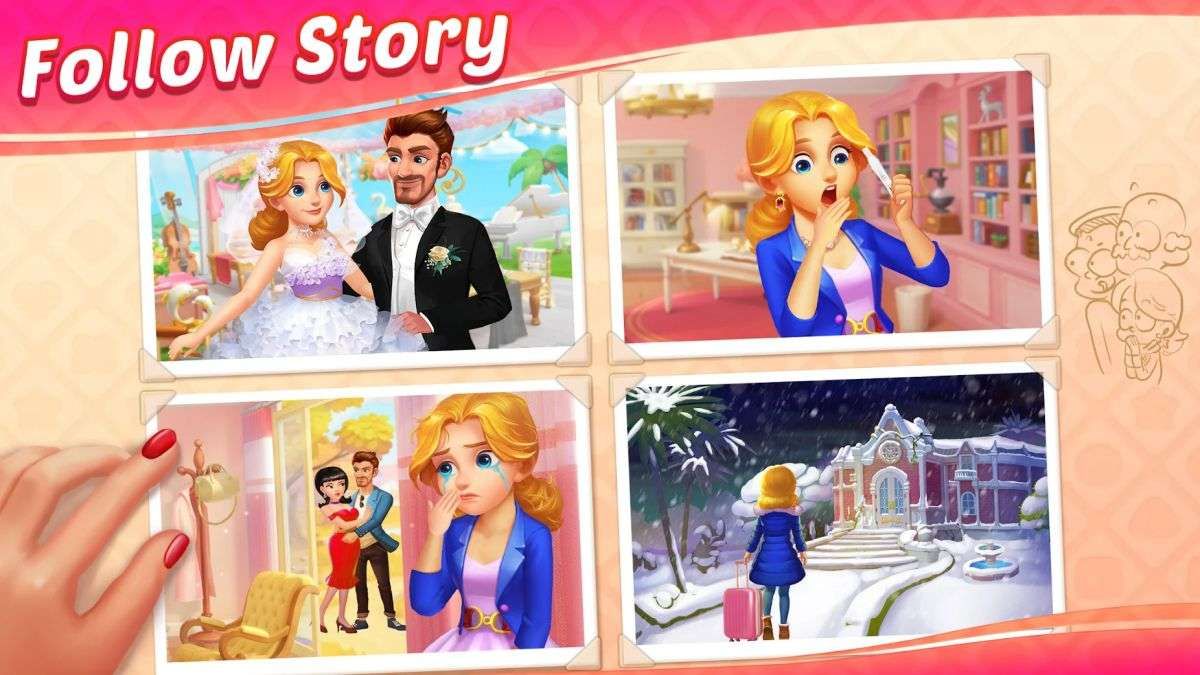 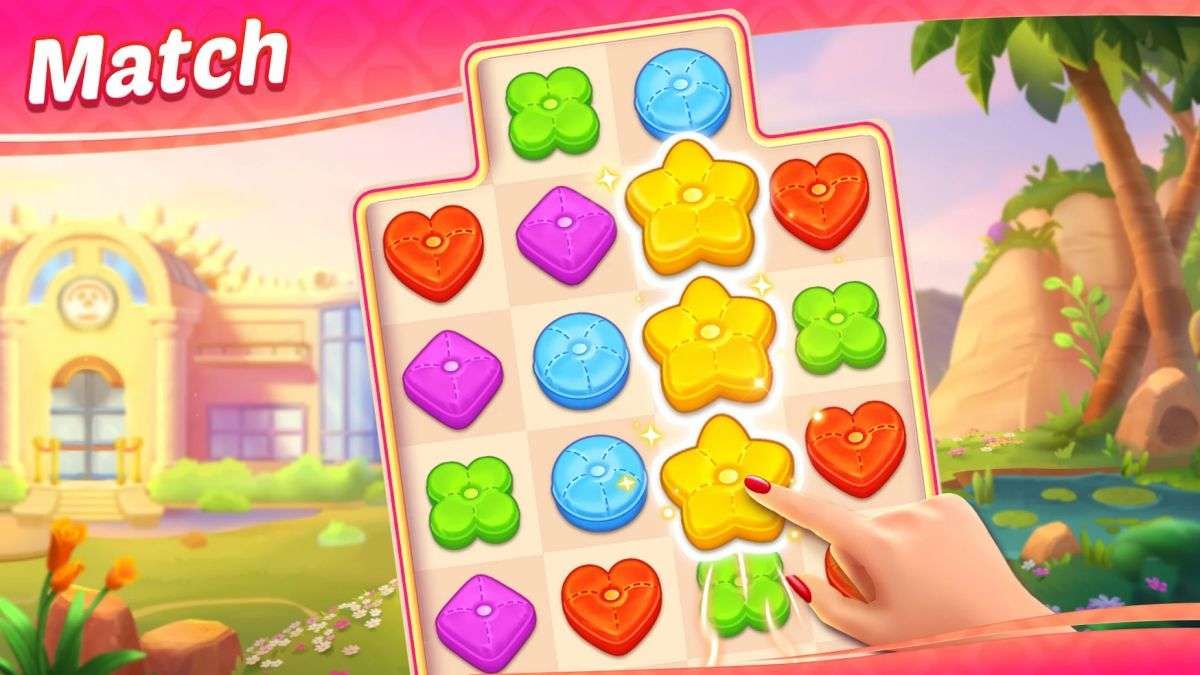 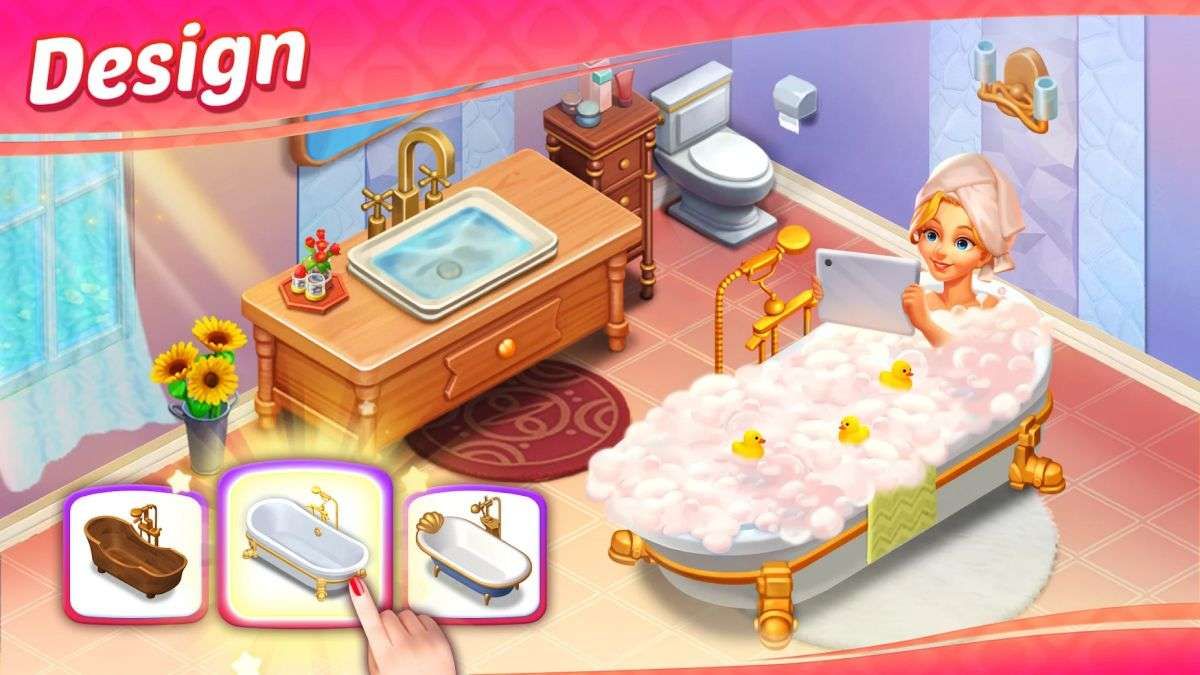 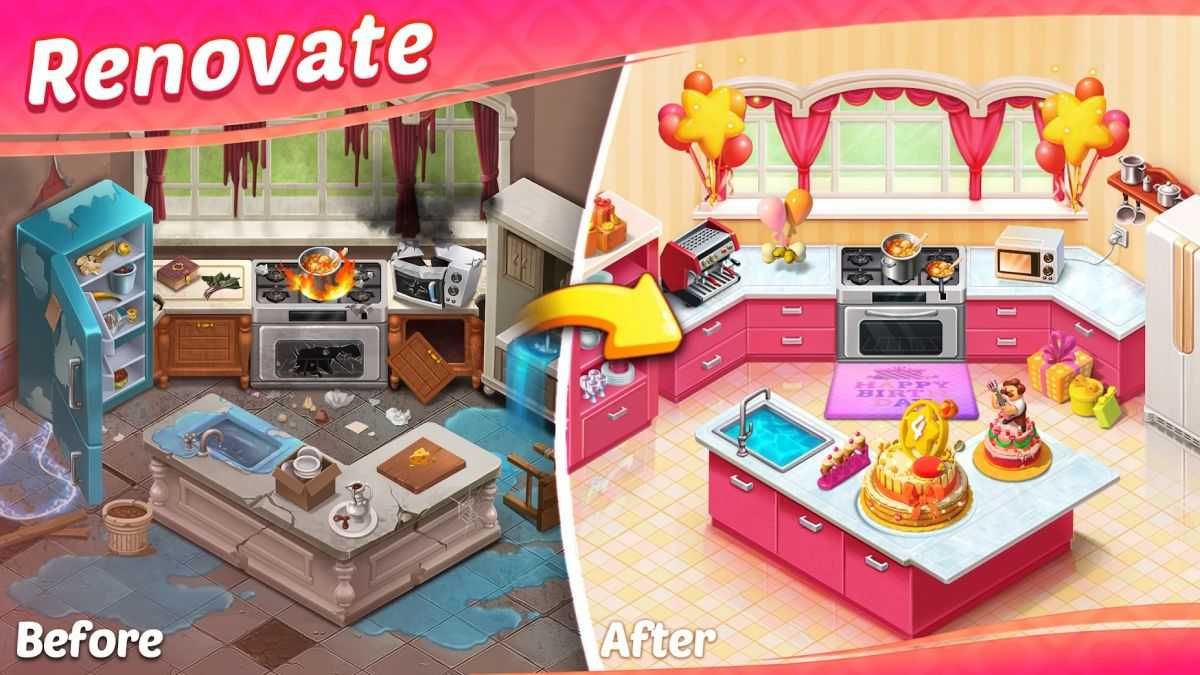 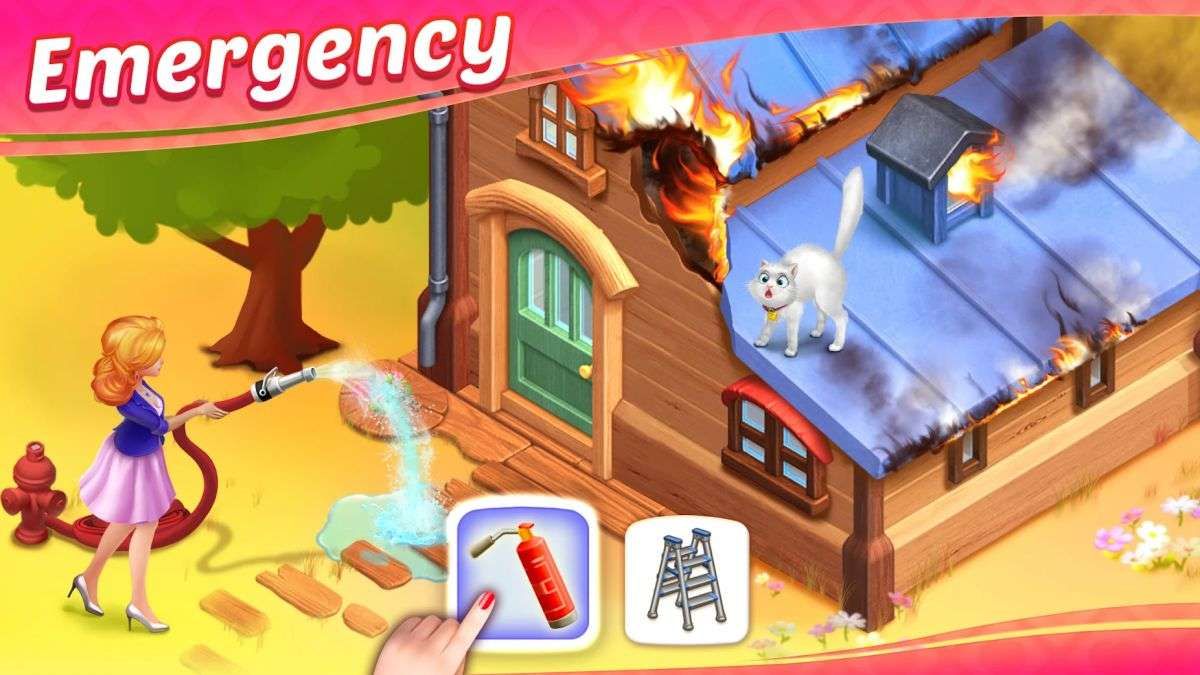 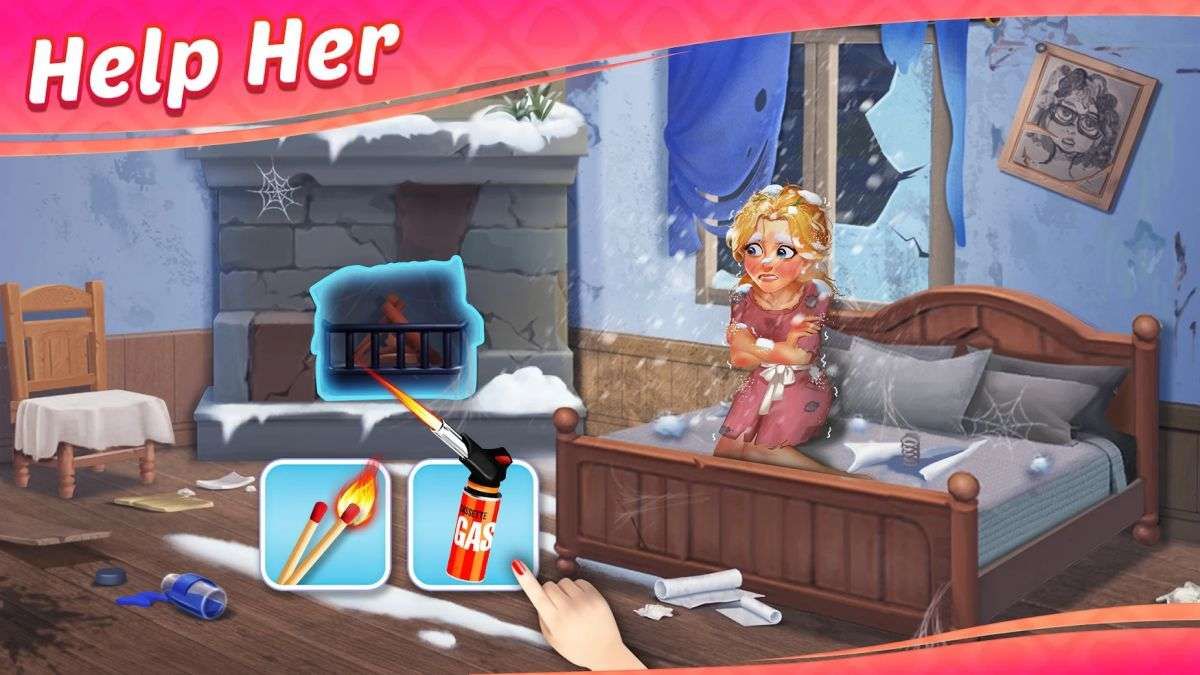 Matchington Mansion is a match-3 style game with a decorating and renovating theme. Play through Candy Crush-style levels with shape matching in order to advance the storyline and restore a mansion to its former glory!

Matchington Mansion is a themed match-3 game that involves the same colorful shapes, bomb and beach ball powerups, and diverse lanes of play as other match-3 games. In the game, you assist a young woman with renovating an old, decrepit mansion. You get to see the mansion in-between levels and watch as the young woman goes about the tasks involved with rehabilitating the home.

Every so often, you'll have an opportunity to use the coins you receive for beating levels to purchase an upgrade to the mansion. This might be a rug in your choice of color, your choice of painting, or your choice of table to replace an old, rotted centerpiece. As the game progresses, the mansion will become more and more beautiful. More importantly, because of your choices, it'll be a reflection of your own design preferences and tastes.

Matchington Mansion is marketed with ads that suggest that it's a game about rescuing characters from hairy situations. While this gameplay does exist, it's quite uncommon. A handful of early game levels are followed by "game" segments in which you must match tools and objects to problems in the mansion. For example, you might match a plunger with an overflowing toilet, a wrench with a broken bathtub, and a vacuum cleaner with a pile of debris on the ground. Not only are these gameplay segments very basic, but they're also few and far between. Don't expect to see these often, if at all.

While Matchington Mansion starts out quite easy, the levels rapidly progress in difficulty. You're able to buy powerups like extra lives from an in-game store with real cash. Like many similar freemium matching games, as you get farther and farther in the game, you'll be able to play less and less each day without spending money. This means that Matchington Mansion is best enjoyed as a part of a suite of match-3 games, not on its own. you can launch a different app whenever you run out of lives, energy, or other freemium resources. Given how many match-3 games there are on the market, it's easy to use this strategy to play all day.

Matchington Mansion's match-3 gameplay is polished, refined, and exemplary for the genre. The sections in between feel well-made in many respects, but they carry the same sort of empty, soulless feeling of many other mobile games. The animations and art seem like they were excessively influenced by early 2000's Dreamworks animated movies and refined by focus groups to appeal to as many people as possible. Situations, objects, and indications feel forced, as if they were willed into existence by tired tropes. The woman's inevitable crush on the handyman is expressed through the most tepid inner dialogue imaginable, for example, and the faces she makes on the game's constant barrage of notifications thread the uncanny valley while imitating Shrek. These aren't enough to make the game non-enjoyable. You're not likely to play Matchington Mansion for the story, either. Instead, you're playing it so you can have another match-3 game while the others are on cooldown.

One of the biggest keys to success in Matchington Mansion is managing your powerups and special tiles. Special tiles can be created by combining regular tiles in certain patterns. As an example, merging four of the same tile can create a firecracker. Merging four tiles in a square makes a square firecracker, merging tiles in an L or T shape makes a big firecracker, and merging 5 tiles creates a rainbow. It's vital to recognize opportunities to create these powerups as you play.

Once you've gotten a powerup, it's important to save it for the right situation. Regular firecrackers explode a whole column or row when swapped with another tile. To explode vertically, move them up or down. To explode horizontally, move them left or right. Try to save these for situations where removing a row will either make massive progress towards the level goals or when you've ran out of other moves.

The square firecracker explores and removes the surrounding blocks in all directions. These are great for connecting sections of tiles that have a gap of filler tiles in the middle. Just like with regular firecrackers, try to save these for later in the level and plan ahead before you pop them.

The big firecrackers have a bigger blast radius than the regular square firecrackers. You use these in a very similar way. Due to their larger blast radius, it's harder to predict what the board will look like after you've set them off. This means you might actually want to blow these up early so you can spend your moves to clean up the board afterward.

The rainbow powerup is special. Swap it with a pillow of any type to remove all of the pillows of that type from the board. This is a massive boon to solving most levels, so trying to get 5 blocks of the same type into a situation where they match should be one of your big goals. On a lot of the earlier levels, a single rainbow powerup can basically complete the level for you.

Later in the game, levels are all about conserving moves and getting the most out of each swipe. Without extra lives, you'll have to restart each level when you run out of moves. In order to get past these difficult stages, play slow and think ahead. If you're close to beating a level, don't be afraid to spend a few lives to beat it. If you're more than two or three moves off, however, you'll want to restart the level from the beginning. As mentioned earlier, there's nothing wrong with playing other match-3 games while you wait for your gold and lives in Matchington Mansion to replenish.

As far as gold goes, the best way to earn gold is to clear levels with lots of moves remaining. This is easier said than done for some stages, but it's worth noting that crushing levels can be a great source of gold. Don't forget to link the game with a Facebook account to exchange lives with your friends, too!

Are you a Matchington Mansion master? How did you decorate your mansion? What's your favorite match-3 game? Did we miss any tips or tricks? Let us know in the comments below!