* For reference, The Snake.io game Reviews websites are all approved, there are no viruses and malware. 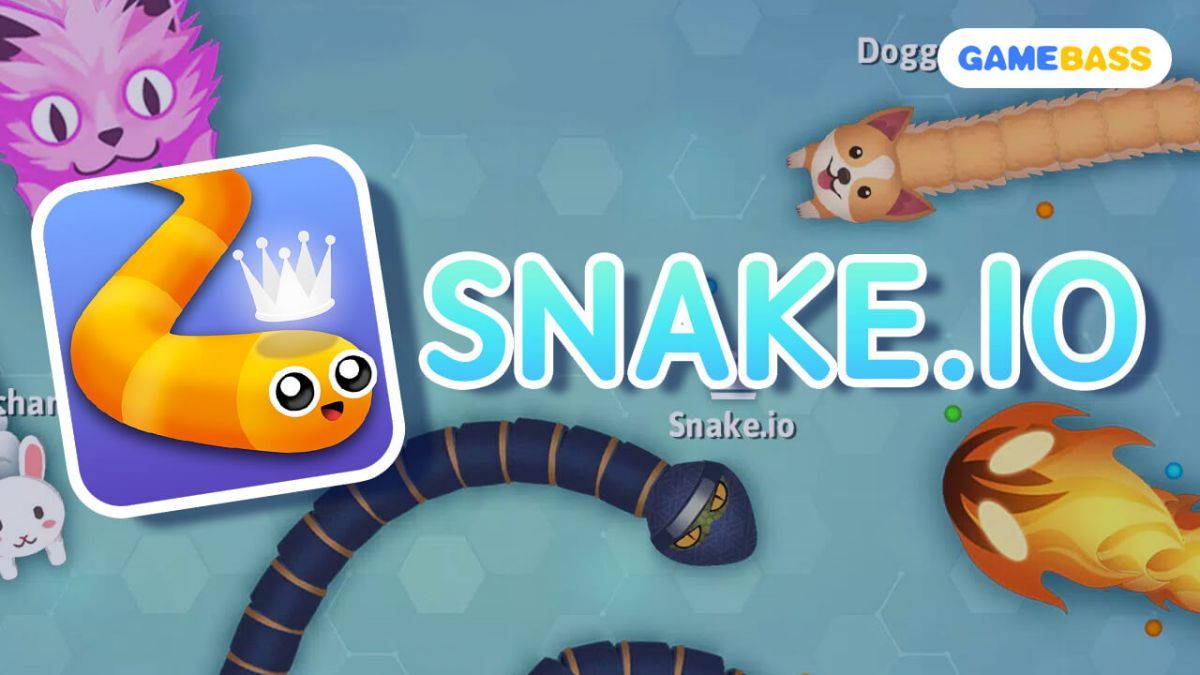 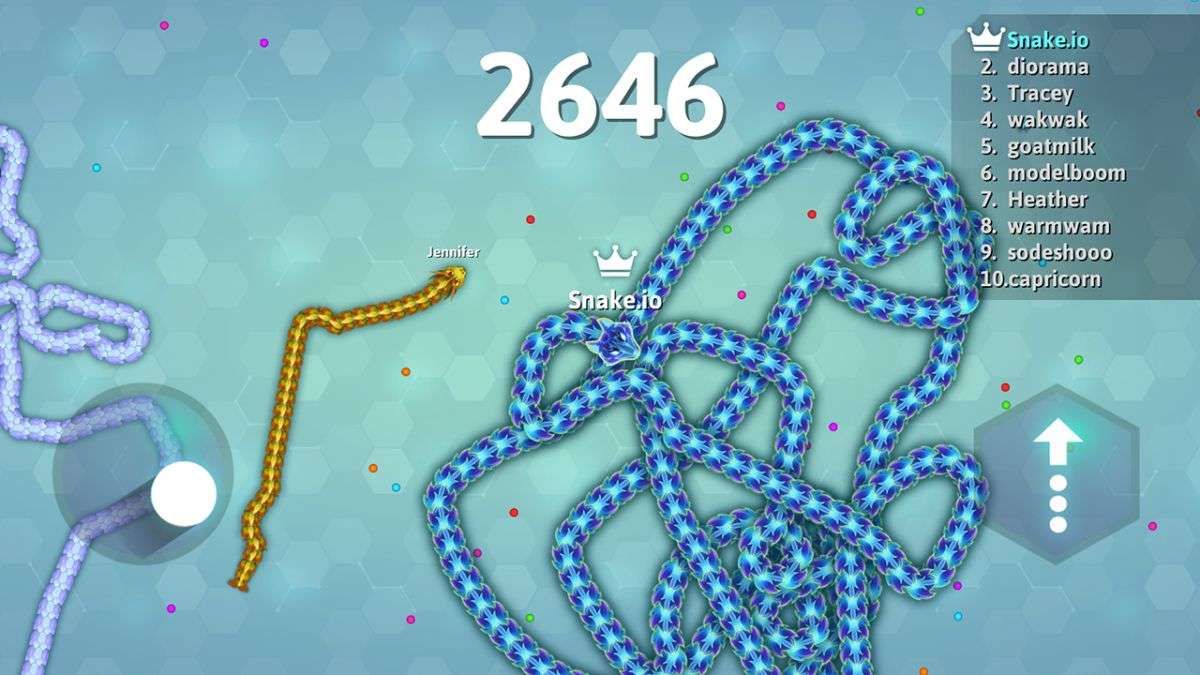 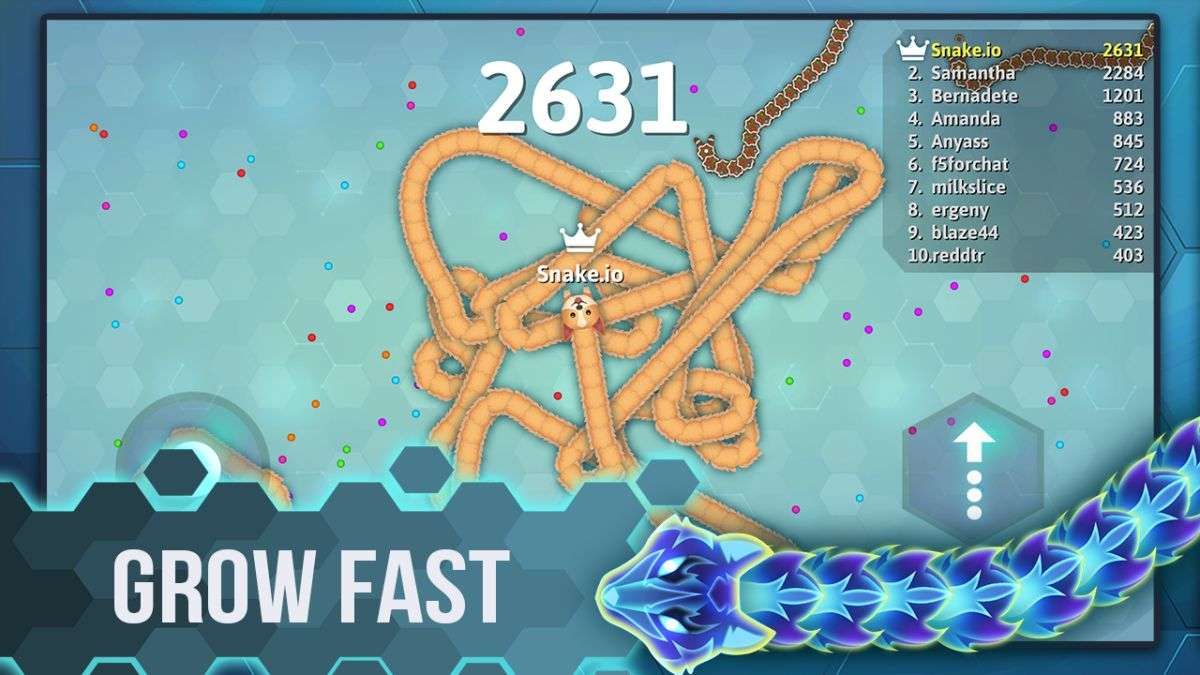 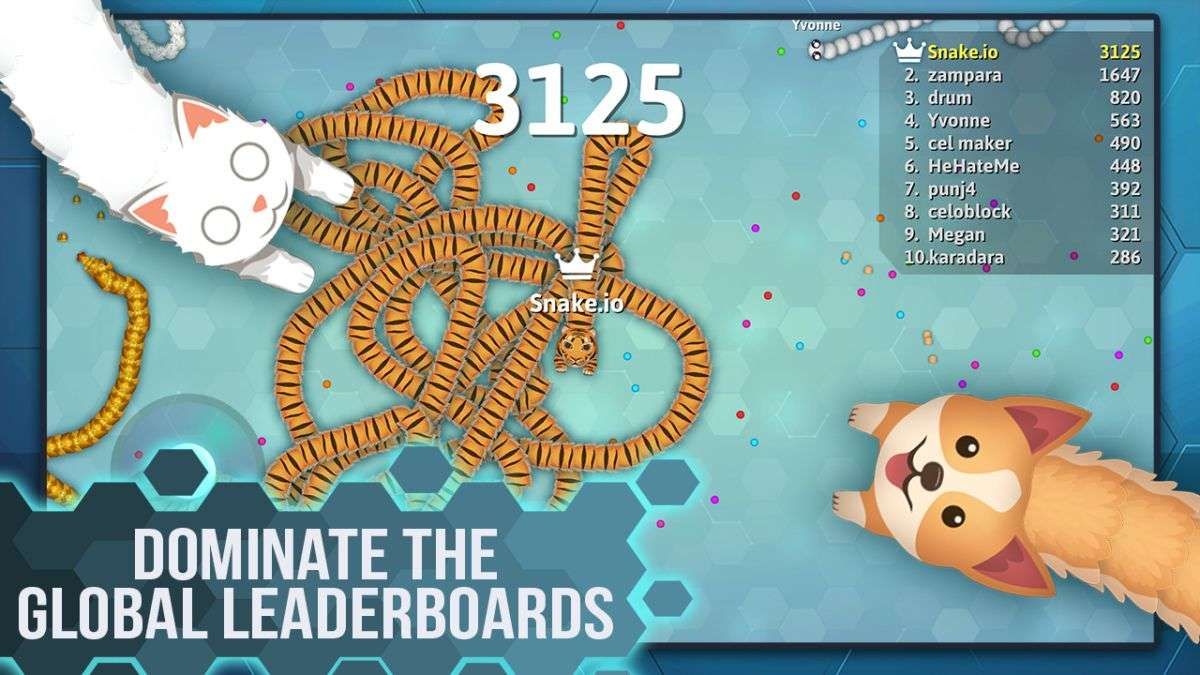 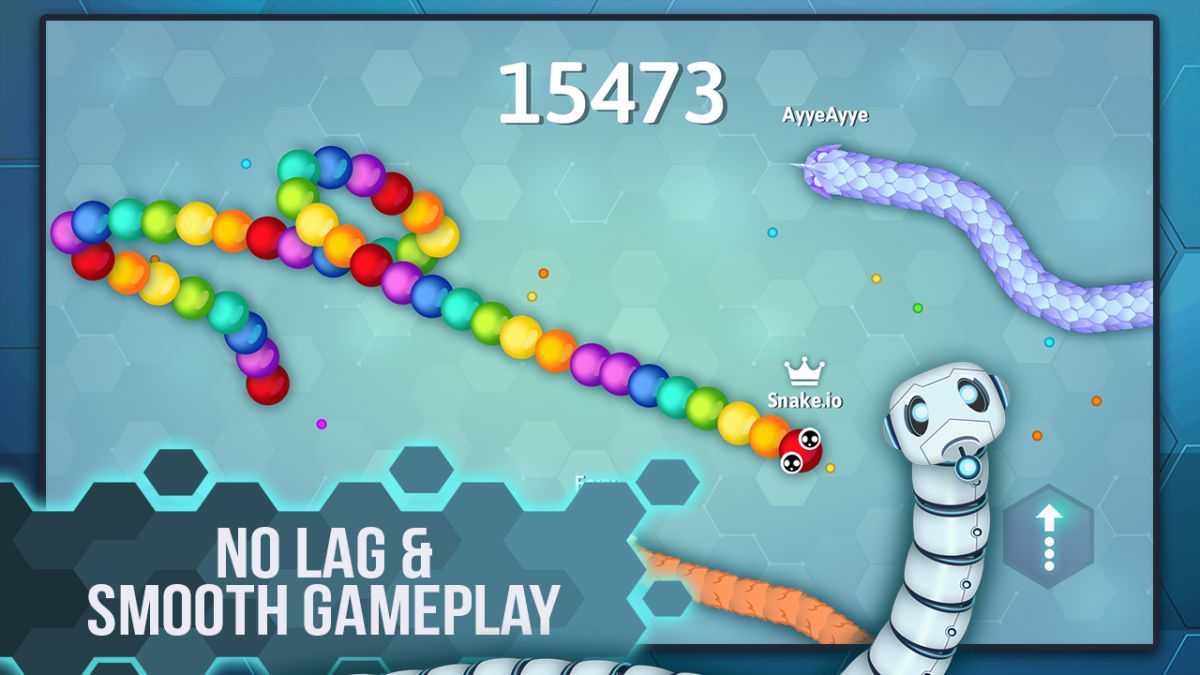 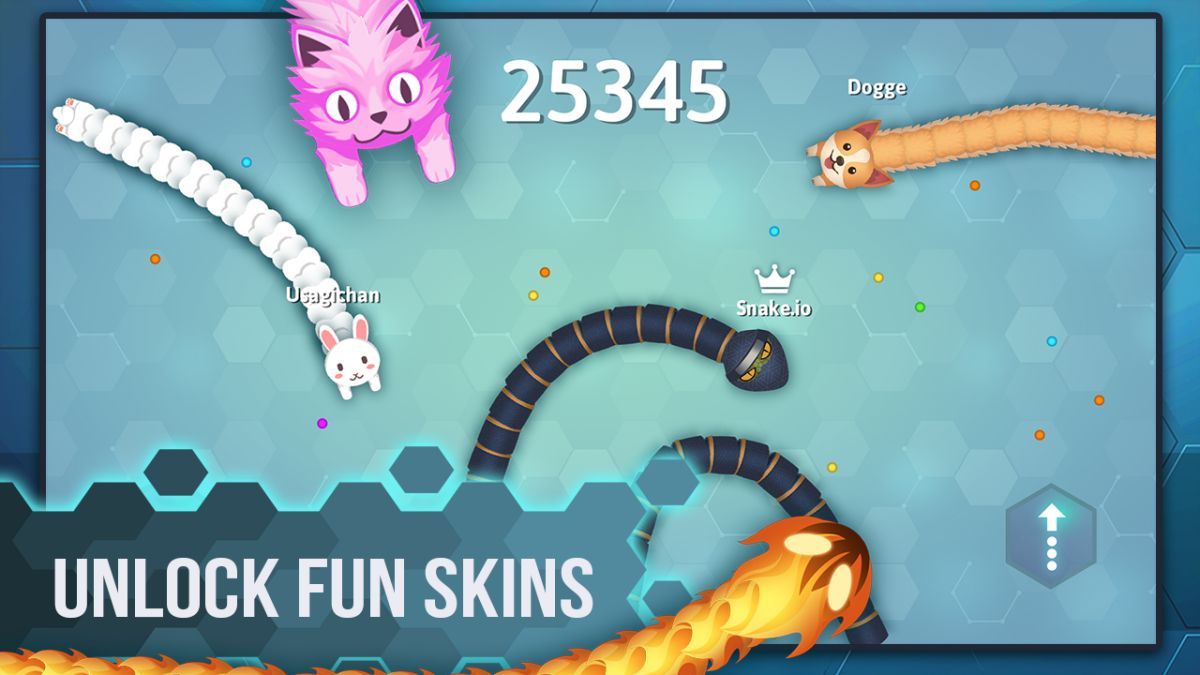 Strive to be the "one snake to rule them all" in this fun arcade ".IO" mini-game!

Casual games are placed in a relatively rough spot. On the one hand, they must pass the so-called "mom test" (even seniors should be able to immediately know how the game works and just get to the action), while, on the other hand, they have to be virtually bug-free, for one petty annoyance could ultimately signal utter failure. Understandably, the demands are very different when it comes to AAA games, though some AAA developers lately go out of their way to release seemingly unfinished games expecting to get a pass (but I digress.)

Snake.io, in that sense, is incredibly successful. It doesn't carry the pretentiousness of many other arcade mobile games and it does exactly what it's set out to do.

The gameplay is smooth as butter, while also being endowed with great, flashy visuals. It's not exactly AAA material, but it's enough to grant an enjoyable experience to people who just want to have a bit of fun on the go, or who wish to enjoy their office breaks without stepping outside.

It likewise manages to be fairly basic without losing intricacy. The gameplay is moderately challenging while not being unfair, which is an extremely important point in its favor, especially when assessing these types of games.

Perhaps you'll remember suffering through exceedingly buggy games during the SNES/Mega Drive era and thinking that you were at fault for not passing a specific level when, in reality, you were confronted with a game-breaking bug you didn't know about (and keep in mind that these games came out before the internet faced mainstream adoption, so there were limited ways to know about these bugs.)

In that vein, this game plays like an extremely polished and bug-free SNES game. Consequently, if you died, it was your fault and not the developer's idea for a torture method (I'm being half-jokingly dramatic here, but you get the point.) Then again, the mechanics are basic, so there's not really that much to screw up, even for old console standards.

Now, if you're savvy about these ".IO" games, this one might look remarkably familiar. Admittedly, Snake.io is not a game you would call "original", as it's essentially a clone of Slither.io, which, in turn, borrowed from Agar.io (the game that pioneered the ".IO" genre). Originality appears to be a foreign concept in the mobile/browser gaming industry, so this is not surprising in the slightest.

Still, there is something about this clone that makes it far more compelling than the "real deal", to wit: its fast-paced rhythm. Slither is slower and gets a bit boring after a short while, whereas Snake developers seem to have found the missing ingredient for addictive gameplay.

Slither is also prone to input delay and lag (perhaps due to the visual load). Conversely, while playing Snake.io, I have found zero instances of lag.

Snake.io is played in an enclosed 2D environment, a "box" with a light honeycomb background most of the time.

The gameplay is pretty straightforward. You start as a very small snake (which is likened more to a worm at that stage) and your primary goal is to get bigger by eating the colored orbs scattered around the playable area while avoiding the other snakes in the process. As you gobble up the orbs, your snake gets bigger and more intimidating.

At first, you will likely die when stumbling upon other snakes but, as you grow, you'll be able to kill other snakes as they smash their head against your voluptuous body, Whenever you "kill" other snakes, they transform into orbs you can munch on to earn more points and grow further.

Up to this point, I'm not able to discern a distinguishable difference in effect between the variety of orbs that you're able to eat but, most of the time, you will just be going through the motions, chasing orbs of every color.

You can also boost the speed of your snake but at the expense of length. In consequence, you ought to only use this feature when you found your snake in a dangerous situation, so as to maintain a healthy growth rate.

A great advantage this game offers is the ability for offline play, which is a plus if you find yourself in an area with limited connectivity or have a precarious data plan. In that scenario, the other players are computer-generated. As a side note, the nicknames are fairly similar in style whether you're online or offline, which leads me to believe that some of the snakes you find online are not really player-controlled, but that's just my personal perception.

This game can be played on both browser and mobile devices. However, as a minor complaint, some features, skins, and events are exclusive to mobile gamers, which I find a bit distasteful, to be honest.

Sure, you have the option of installing the game on your mobile phone or tablet and playing there, but these limitations defeat the purpose of allowing players to choose between multiple platforms in the first place, especially since they don't appear to be based on technical constraints.

In addition, some people struggle with on-screen controls, or simply prefer to play with a mouse on a larger screen. Hence, it would have been nice if browser players were granted the same features and opportunities, but, alas, the devs decided otherwise. For the record, I don't find the mobile controls to be overly clunky or difficult to handle (at least the default ones), but I particularly enjoyed playing with my mouse a bit more.

On another note, several features can be accessed via ads (and you'll be watching tons of them - whether you like them or not - unless you're ready to pay $1.99.)

For example, you can "Start Big" (like an "easy mode" of sorts) by which you'll be given a head start with some points earned in advance. Notwithstanding, I have used this feature sparingly because I prefer the thrill of starting small and working my way up.

Finally, skins for your snake can be unlocked by performing certain tasks (such as - you guessed it - watching ads) or by reaching milestones during your playthrough. Alternatively, you can pay money to unlock some of them immediately.

In a nutshell, Snake.io is a very fun (and sometimes downright addictive) game that I undoubtedly recommend, provided you're into casual games and are capable of enduring 30-second ads every now and then or you're willing to spend some of your hard-earned money on the ad- version.

Did you enjoy this analysis? Don't hesitate to share your thoughts about this review or the mini-game in question by leaving a comment below!